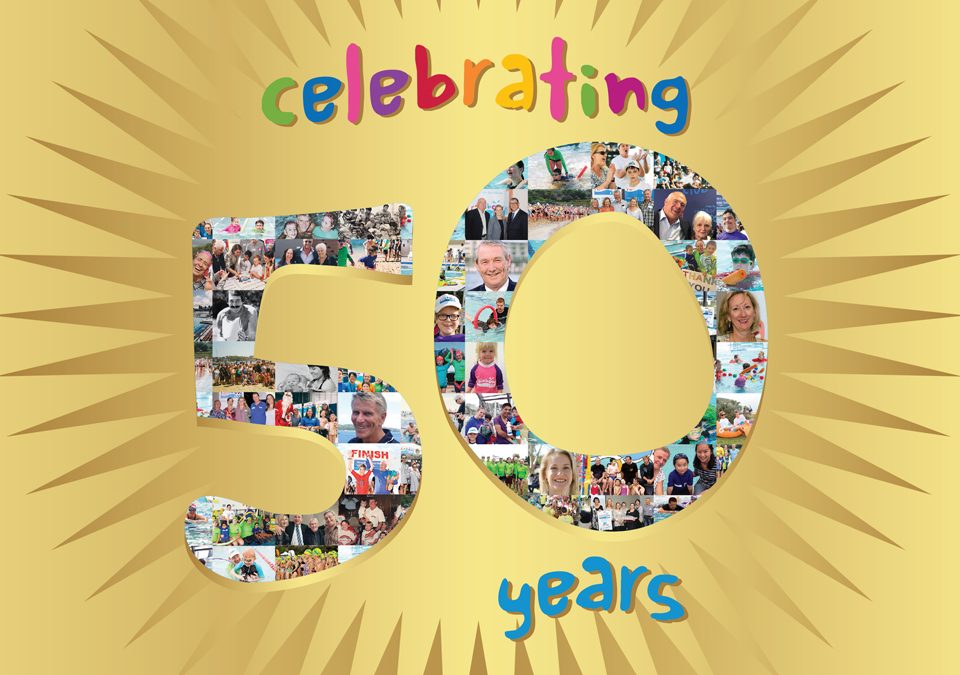 Rainbow Club sets no limit on what the children can aim for, or any expectation of what they ought to achieve. – Ron Siddons, 1986

Rainbow Club – 50 years of highlights:
1970-73 Ron tests his inflatable swimsuit prototypes and starts a free swim school.
1974 Rebecca is told she can’t swim but joins Ron and becomes an Australian champion.
1975-77 Ron’s cossie is marketed. Of his cossie, Ron says, “I want families to enjoy the water without constant fear of tragedy.”
1979 Prisoners host an Olympics fundraiser. Ron joins them for a marathon.
1981 Ron is the first lifesaver to receive an MBE.
1983-86 Ron calls his growing group Rainbow Club and some of his students graduate to swim teachers.

Why ‘Rainbow Club’? Ron chose the name Rainbow Club because it represents a bright future – if you can see beyond the rainbow, you can believe anything is possible.

1987 Ashley’s mum praises Rainbow Club for his health and happiness.
1988 Ron makes Fiona and Rebecca office bearers and they host the first social day.
1990 Ron is awarded on OAM for his volunteer group.
1991 An eastern suburbs Club opens and employs a swim teacher.
1992 Rainbow Clubs pop up across Sydney. Families unite at horse riding.
1993 Ron forms a volunteer Board led by Philip Holt, with John Taplin joining the Board soon after.
1995 The first annual ball at Sydney’s Parliament House is a sell out and makes the news.
1998 Swimming legend, Murray Rose becomes Patron and is soon in the pool.
1999 Suzanne Stanton becomes President and is honoured as a Life Member in 2013. She remains on the Board until 2019.
2000 200 children enjoy the first Christmas Olympics.
2001 Blind marathon swimmer, James Pittar joins as Ambassador and swims from Palm Beach to Manly. NSW Governor, Marie Bashir is a fan.
2003 Olympic champs raise $15k at Swim over the Rainbow Challenge.
2004 Ryan from Campbelltown Club falls into Sydney Harbour…and saves himself.
2006 475 children swim in 14 Rainbow Clubs. A new logo is launched.
2007 It’s the GFC, but there’s a ray of sunshine in a big cheque.
2008 Australian Olympian, Melinda Gainsford hosts the Bollywood Ball.
2009 506 swimmers face awful conditions at the first Malabar to Little Bay Challenge.
2010 This year conditions are prefect for the ocean swim.
2011 Louise Sauvage and Mark Speakman become Patrons and Louise is often seen at Rainbow Club events.
2012 NSW Minister for Disability announces a $250k grant along-side Mark Speakman and Alexandra Finley.
2013 The ocean swim is renamed the Murray Rose Malabar Magic.
2014 Georgia is the first Rainbow Club child to make the Malabar Magic; Aqua Awards open.
2015 Swim the Rainbow, the green rashie and the Family Carnival launch.
2016 New resources for Clubs and the inaugural Maree Jackson Medals are awarded at the Malabar Magic.
2017 573 children Swim the Rainbow weekly and the Family Carnival is held at Sydney Olympic pool.
2018 Swimming royalty, Dawn Fraser launches the tenth Malabar Magic and 10:10:10 Challenge.
2019 Let’s celebrate Rainbow Club and its 900+ members!

To everyone who has made Rainbow Club a success, thank you. You should feel very proud. It really is a place that creates magic, in and out of the water. – Alexandra Finley, Rainbow Club President, 2010-today

Photo: In 2017, six-year-old Sawyer gives Rainbow Club a thumbs up, alongside his dad Steve and teacher Nikos. Now we’re giving a thumbs up to his brother. Sawyer’s big brother Hudson told us, “Learning to swim is very important because we live near the beach. All people in Australia should know how to swim.”