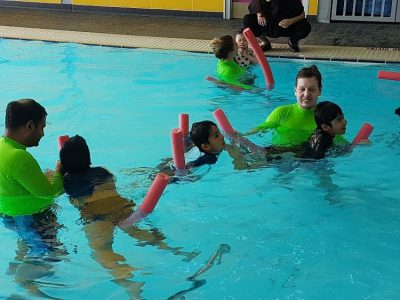 From Train to Teach to running The Ponds Rainbow Club in just one year!

Kevin Alvares is dad to Zane and Myles who are members of Cherrybrook Rainbow Club. He participated in 2018 Train to Teach. He started working at The Ponds Rainbow Club in November 2018.

In June this year there was a crisis at The Ponds when the Lead Teacher resigned suddenly. By then Kevin had established himself as a reliable teacher with skills necessary to become a Lead Teacher.

Nicola Davies-Cooke visited the Club at the start of Term 3 and provided Kevin with the mentoring and support he needed to take on the role.

Three months later another crisis erupted at The Ponds Rainbow Club when the Committee members had various family issues and could no longer continue to support the club.

Kevin stepped up again and took on the role of Scheduler and with Janey Valencia-Concepcion as a parent representative, the Club has been operating successfully for the last term. Kevin has instigated procedures for offering casual lessons to children on the waiting lists when members are absent, maximizing the use of teachers which are so hard to find in that locality.

Lachlan also works at The Ponds Rainbow Club reporting to Kevin and Lachlan was also part of our 2018 Train to Teach. They make a great team!.

24 children are current members of The Ponds Rainbow Club and it is likely they would not be having this experience if it were not for Kevin and Lachlan and the 2018 Train to Teach program.