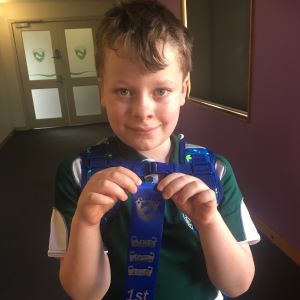 Kylan started at Campbelltown Rainbow Club when he was 5 years of age. Kylan has Autism and lots of anxiety. His parents, Tanya and Craig, were keen to make sure that Kylan learnt basic swimming skills and confidence around water. They tried mainstream swim schools but learning in a group did not work and Kylan’s anxiety increased.

After one year at Campbelltown, Kylan was making progress when the family decided to move to Bathurst. Kylan was able to transfer to Rainbow Club at Orange. Every Saturday the family made the 48km round trip to Orange so that Kylan could continue with his individualised lessons under the instruction of his teacher, Leanne. Kylan’s anxiety around putting his face in the water continued but his confidence grew and most importantly he learned safety skills that he will have for life.

Fast forward to January 2020 and Kylan just turned 8 years of age. He attended his first school swimming carnival and his confidence had increased to the point where he entered every race.

“Kylan attended his first swimming carnival today. He went in every race, and even though he still didn’t put his face in the water he finished every race and got out thinking he had won 😂 It is thanks Rainbow Club that Kylan has his confidence and skills so far. He misses coming to Rainbow but Craig and I would like to thank you all for what you have helped Kylan achieve with his years at Rainbow.”

For Kylan the goal has been achieved. He has the confidence and is safe around water. The family can now take a break from the Saturday morning 100km journey and another child with a disability from Orange will receive a Rainbow Club opportunity.