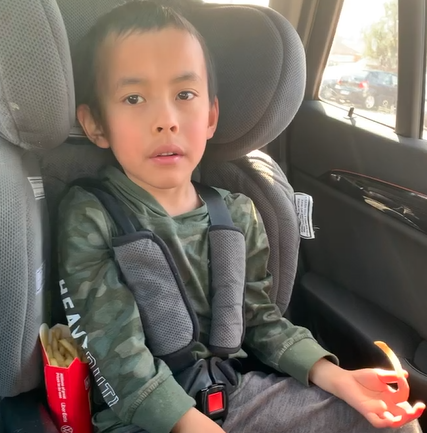 Samuel Cheah has been swimming at Villawood Rainbow Club since March 2019. Samuel has a high level of anxiety and little speech so there was concern that after some time away from swimming, he may need some additional reassurances to make him feel comfortable.

Villawood Rainbow Club reopened temporarily at Mounties in Mt Pritchard and with a new teacher Michelle so it was a lot of change for the first week back. Samuel struggled his first day back. He got very upset and was very vocal about it screaming, the only way he has to show his upset. He tried to ‘escape’ from Michelle after 5 mins, stripped off his swimmers and refused to put them back on again.

Samuel’s dad Douglas wanted to help his son settle back into swimming so he asked the teachers for advice. As a result, he edited Rainbow Club’s Return from COVID Social Story to customise it for his son. He showed this social story video to Samuel and reminded him each day that he had swimming on Sunday.

Unfortunately the next weekend Michelle was not able to be there but even with the added change of another new teacher, they decided to still go to swimming and do the best they could.

The relief teacher, Auston really worked with Samuel to help him be at ease and was great in keeping Samuel in the water. Samuel was still upset but he was able to stay in the water for the full 25 minutes and as a reward he received his Macca’s chippies on the way home.

As a result of Doug’s special social story and working with the teachers at Rainbow Club, he saw improvement with Samuel and there couldn’t have been better timing as it was Father’s Day that Sunday. Douglas contacted Rainbow Club to say thank you and it was a great Father’s Day gift for him to see Samuel in the water.